My Commitment as an Eye Doctor in Africa

Outreaches in one of the poorest countries in the world: The eye doctor Dominique Mustur treats people in Togo who suffer from an eye disease.

Men and women sit on two rows of benches in a small hospital in Togo, Africa. "One looks into happy, grim, interested, confused faces", says the diary of the Swiss foundation "ToGo opening eyes". Each of the patients is here with their relatives, some of them are blind. A team of ophthalmologists, anaesthetists and surgical nurses from Switzerland has a lot to do on this Monday in September. Also present is the Zurich ophthalmologist Dominique Mustur, who has a practice in Wollishofen. A total of nine cataract surgeries, i.e. treatments for cataracts, are scheduled for this day. They are all successful. 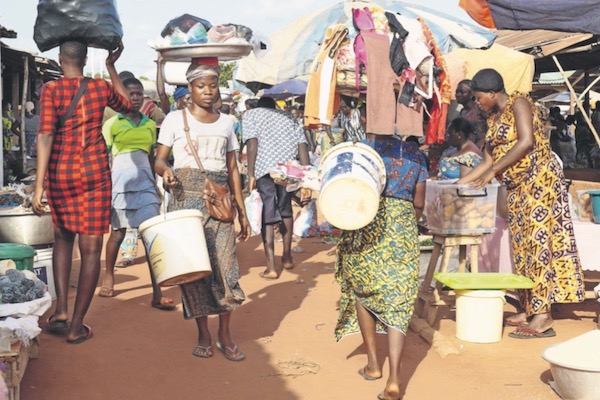 The small Togolese town of Vogan is about 60 kilometres from the capital Lomé. This is where Dominique Mustur travelled to operate. (Photo: ToGo opening eyes foundation) 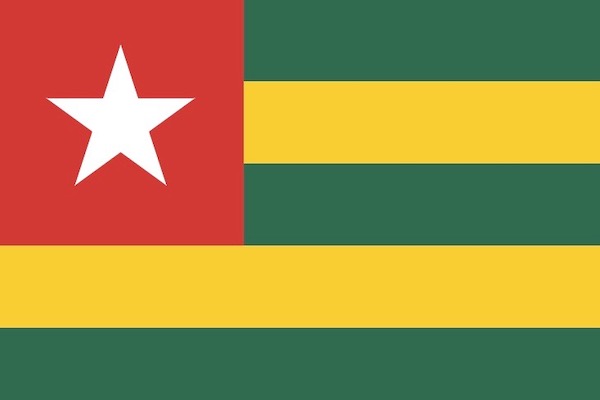 Togo is a small state in West Africa with about 8 million inhabitants. French is officially spoken, the languages Ewe and Kabiyé are national languages. The country with an area of 56785 square kilometres is one of the poorest states in the world. Togo borders on Ghana, Burkina Faso and Benin.

Next assignment in Togo?

The next mission in Togo by ophthalmologist Dominique Mustur is planned for autumn 2020.

The foundation "ToGo opening eyes" is dedicated to the fight against cataracts. This disease causes the lens of the eye to become cloudy. Once the disease has progressed, the affected people see as if through a frosted glass. If cataracts are not treated, you can go blind. Togo is considered one of the poorest countries in the world and there is a lack of ophthalmologists. Accordingly, there is a lot of undersupply. This is where the foundation steps in: it wants to help with free eye treatments. 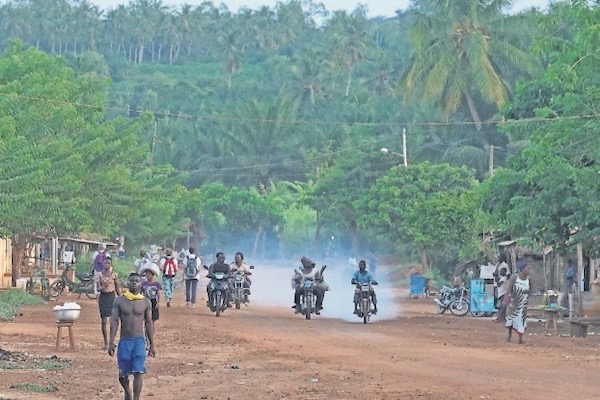 The infrastructure in the African country of Togo is poorly developed - as are the roads.

Patients come from far away

For the second time Dominique Mustur is operating in Vogan, which is about an hour and a half drive from the capital Lomé. "Vogan is small, the town has only just over 1000 inhabitants," says the 44-year-old. The road is full of potholes and the infrastructure is poorly developed. "After all, the hospital has a well-equipped operating room, but unfortunately no equipment for eye operations," says Mustur. This is brought in containers from Switzerland. The assignments last two weeks each.

Word of the offer has gotten around: Some people travel up to 600 kilometres to be treated. An operation lasts from 15 minutes to one hour. The team only treats people with very advanced cataracts. "In almost all cases, we only operate on one eye in patients who are ill - so that we can help as many as possible," explains the eye surgeon, who has travelled Africa many times before. In Cape Town she worked for eight months in the eye clinic of the university there. Follow-up treatment is provided by Togolese hospital staff trained by the Foundation.
"You can't change the world, but you can help people," says Mustur self-critically. She is happy about every successful operation. The missions in Togo would each time put the everyday problems of the population in Switzerland and throughout Western Europe into perspective. 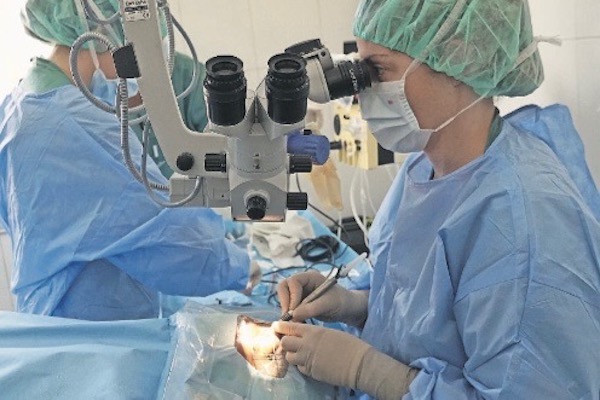 Dominique Mustur operates in a small hospital in Vogan. 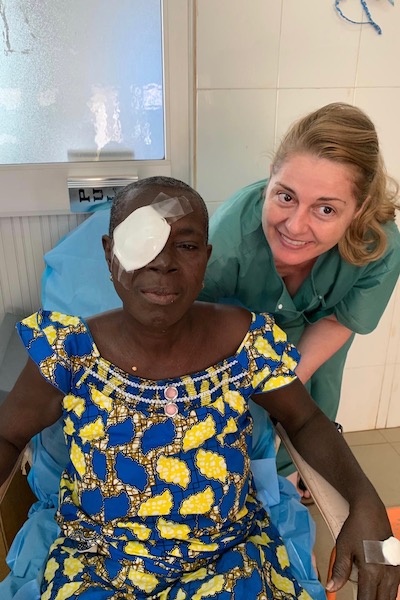 After the Eye Operation

Dominique Mustur and the patient at the hospital in Vogan.

Every Wednesday or Thursday there is vision school and children's consultation hours.

Google Rating
4.9
Based on 37 reviews

Levent Demiray
19:46 26 Dec 20
After seeing 3 doctors, she could fix my eye. Very nice person and doctor. my personal best doctor experience in Zurich.

Jürgen Count
12:13 27 Sep 20
An excellent eye doctor. I was there on a Tuesday. Great analysis and great advice. I can always recommend it. Very nice practice with professional staff. A definite recommendation!

Tatiana G
08:31 23 Sep 20
Super nice modern practice in a great location with public transport near the train station Wollishofen very easily accessible and a nice positioned competent doctor with a great friendly team! Thank you so much for listening to us, being patient with us, having explained all the misunderstandings and ambiguities during the consultation, we feel very well advised by you and look forward to the laser cataract surgery on Tuesday. Many thanks for everything.

Ian Dawson
13:32 11 Sep 20
It is rare to find a friendly professional team so "switched on", and led by a remarkable Dr Dominique Mustur, using the latest technology in eye care. I was completely surprised and enjoyed my "new eyes" experience at the Augencenter Wollishofen. The result is amazing!

Rada Glamocanin
19:25 27 Aug 20
Very nice and friendly staff and doctor competent, thank you very much for letting me come immediately today as an emergency despite the congress until next time .I will definitely recommend her to others .Kind regards Ms. Handschin and daughter

Tarpan Patel
10:21 17 Feb 20
First of all Dr Dominique, is a great amazing personality. She extremely friendly and puts the patient at ease as soon as you come across her. She is the best doctor I have ever met.

baricaded47
07:03 14 Feb 20
As an American, who has experienced some of the best medical care on Earth, I truly must say, that this is quite the clinic. Dr. Mustur is more than just an expert, she is an absolute master of her craft. The extreme focus on customer service, along with the quality and delivery of her services, is astounding, and should be championed within her field's community. Five stars doesn't do her phenomenal work justice. The world would be a better place if more doctors orchestrated and conducted their work the way that Dr. Mustur does.

nipun nagpal
16:16 25 Jan 20
I had the best experience at Augencenter Wollishofen. The Clinic is equipped with best equipments and services are provided at the earliest. My problem was solved very soon and perfectly.

Aamr Orban
21:21 22 Jan 20
We called the clinic for an emergency related to my mother and we received an appointment on the same day.they handled my mother in a very professional way and made different tests.Doctor Mustur examined her and gave her the complete analysis and advice. Thanks to the careful examination of the doctor we knew from her that my mother needs urgent examination in another part of her body.as a result, we were able to cure another problem which my mother was not aware of.The doctor is very competent and gives attention to all details and communicates in a clear way.The clinic has a parking, lies in a very central place and is big, modern and stylish from inside.I recommend doctor Mustur 100%

Melissa Gil
15:37 06 Dec 19
Excellent service: everything was explained clearly, work was very professional and Dr. Mustur is an absolute pro.

Ina Bucher
08:33 06 Nov 19
Not only a super stylish practice but also a very lovable team. I felt I was in good hands with Dr. Dominique Muster, she gives you a pleasant feeling and her high level of expertise. Highly recommended!

Alex Wick
08:21 06 Nov 19
Very cool and friendly ophthalmology practice. Was there for an eye check and got an appointment quickly. Situated doctor with sympathetic and competent charisma.

Jens Rudin
07:24 30 Oct 19
It was my first time in Dr. Mustur's practice and I was thrilled. Mrs. Mustur is a very friendly competent doctor. She took her time, examined me in detail and explained the findings very well and understandably. I've never seen it like this before. The staff is also very friendly and helpful. So from my side full five stars and I will definitely stay in this practice.

Noa Jans Schneewunder
08:29 21 Oct 19
I was given antibiotics for the eye, although she herself said it was not inflamed. I just thought since she's the eye doctor, she should know. My eye looked better after the antibiotics, too. But after I put it down, it turned red again. I then took 4 days Weleda eye drops and everything was fine. Giving antibiotics when there is no need to do so is not responsible to me. In addition I was frightened about the very high bill for me. I was also offered eyelid cleaning cloths for 30 francs, which are not covered by health insurance and which I have only used once so far, as they have not been of any use. It seems to me that they prescribe drops of antibiotics across the board. My bill, which I have to pay myself with a deductible of 2500 francs, was exaggeratedly high. For two sessions that lasted less than 20 minutes... In the future I will only contact my family doctor.

A Mackrill
15:08 25 Jul 19
I was very impressed with my first visit to this quite new practice. Everyone was very welcoming and professional, as were the surroundings. The doctor and her staff were also happy to work with me in English, my native tongue. Their language skills were very good and much appreciated. Overall I couldn't fault the services they offered. The location is great too, right by Wollishofen Banhof with its easy train, bus and tram connections. We were originally referred to a different doctor by a local optician. That doctor turned out to be on holiday, but his answering machine message recommended Augencenter Wollishofen in his absence. Some things are meant to be 🙂

Johana Drabek
12:17 17 May 19
Competent, modern, fresh. A visit to the doctor one looks forward to. Dr. Mustur takes his time, listens and explains the examination and further treatment in a way that is understandable and comprehensible for me as a patient.

Wani Finkbohner
17:45 11 May 19
Cool and modern practice with the latest equipment. I was with my 6-year-old son at Dr. Mustur's. Due to her open and competent manner, she quickly dispelled reservations. She treated us quickly and painlessly. On the double! Gladly again 🙂

Daniel Friedrich
12:13 10 May 19
Many thanks for your friendly, competent and super fast help, also that I was immediately admitted and treated. Hopefully not "see you soon"... 😉 Best regards Daniel Friedrich

Maria Elisa Kaserer
06:18 02 Apr 19
Very friendly and competent ophthalmology practice directly at the Wollishofen train station. I got an appointment very quickly and reached the beautiful new practice quickly by public transport. The reception was really friendly and Dr. Mustur very professional. She examined me thoroughly, explained everything and gave me very good advice. Can definitely recommend her and will be happy to continue coming here in the future.

Tanya Worn
21:47 13 Mar 19
Dr. Mustur used the best solution for my dry eyes. She is a very refreshing, pleasant and above all competent doctor!

Michael Cobb
14:41 05 Mar 19
Dr. Mustur is a young and dedicated doctor and has made time for me. Great that there is a parking lot - important for me because I come from outside.